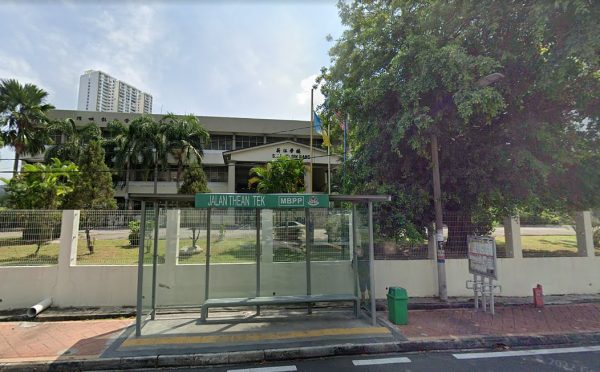 SRJK (C) Sin Kang traces its roots to 1906, when the board of directors of the Leong San Tong Khoo Kongsi under its then chairman Khoo Eu Yong undertook to establish a school to educate the children of the Khoo clan. This led to the founding of the Khoo Liang Deng School, which initially occupied the compound of the clan association at Cannon Square. As student intake rose, the school relocated to occupy classrooms at the Chung Hwa School. It moved once again, to a row of shophouses at 89, 91, 93 and 95 Victoria Street. It was then renamed the Sin Kang School, in commemoration of the Khoo ancestral village.

The upheavals of Second World War forced the closure of the Sin Kang School. After the war was over, the Khoo board of directors once again undertook to re-establish the school. A new site at Thean Teik Estate was earmarked and the association pooled a sum of $20,000 Malayan Dollars for its construction. Also chipping in were the other Khoo clan associations, including the Boon San Tong, the Tun Jin Tong and the Sin Kang School Union.

The initial school building for Sin Kang School at Thean Teik Estate was completed in 1953 and officially opened on 11 January 1954. After Independence, the Sin Kang School was nationalized, and took on its presently, Sekolah Rendah Jenis Kebangsaan (Cina) Sin Kang, in 1958.

Over the years, student intake at SRJK (C) Sin Kang continued to rise. This was especially so when Thean Teik Estate was re-developed as a new township. To address the increase in students, the Leong San Tong received the cooperation of the Farlim Group, the developers of the township, for an equal share in constructing a bigger building for the school. The ground breaking was carried out in 1992. and the present SRJK (C) Sin Kang school building was completed in November of the following year.