Leong San Tong Khoo Kongsi, or Khoo Kongsi for short, is one of the most distinctive Chinese clan associations in Malaysia. It is well known worldwide for its extensive lineage that can be traced back 650 years, as well as its closely-knit and defensive congregation of buildings and a magnificent clanhouse.

Surprisingly, famous as it is, its location appears to be unknown to many Penangites. It is situated at the southwest of Georgetown, and its pivotal building, Leong San Tong, is hidden amidst the crowded gridiron of terrace houses and shophouses. To make it to Leong San Tong, which is perhaps the most majestic clanhouse in South East Asia, you will need to tread through an alley between two rows of 19th century terrace houses and bypass the opera stage, before you see it stand majestically on the granite square.

Khoo Kongsi, together with Cheah, Yeoh, Lim and Tan Kongsi, were known as the Five Big Clans (Goh Tai Seh) that formed the backbone of the Hokkien community in early Penang. Since mid-19th century, having identified their respective bases, these kongsi rooted themselves in an area stretching from Chulia Street Ghaut in Georgetown to the lower part of Beach Street in the south. With the respective clanhouses as the nuclei, these kongsi demarcated their territories with their own terrace houses on three or four sides of the perimeters. This adjoining, closely-knit and defensive model settlement, like a clan village in the colonial city, is a rare form of congregation practised among migrant communities. 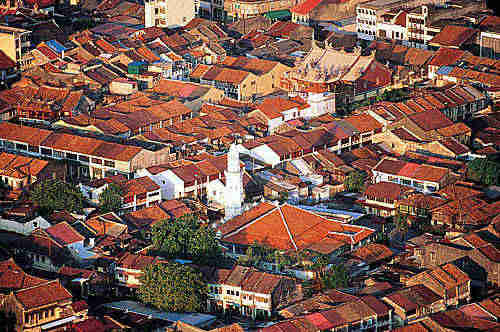