Origin of The Khoo Clan in Sin Kang 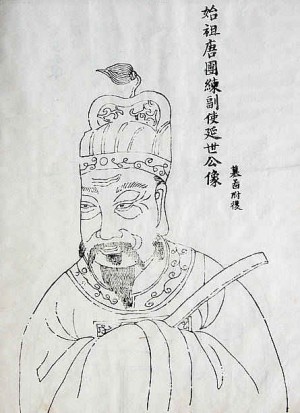 A drawing from The Genealogy of the Sin Kang Khoo and Chan Clans which shows the location of the tomb of the Progenitor Chian Eng Kong and Saw See Cheng. The tomb faces west-northwest – (CLICK TO ENLARGE)

Sin Kang Seah is presently Sin Aun Village in Xing Lin District, Xing Lin Town, Amoy (Xiamen), which is under the administration of the Hai Cheng Department of Amoy City Council. This 10 sq km area, which is some 8 km west of the island of Amoy, is situated at the estuary of Sin Kang River, a downstream branch of Kew Leong River. It was a typical clan village of a single surname in costal Southern Fujian. Of its total population of 7000, 78 percent have the surname Khoo.

Chan Yan Si who was an assistant trainer in the army of the late Tang Dynasty and his whole family who followed the troop of Ong Teoh (Wang Chao), migrated from Henan Province southward to Oon Leong (Leong San), Nan Aun County, Chuan Chiew Prefecture, Fujian in 885 – 886 to avoid the catastrophe of Huang Chao Rebellion. Chan Kong Cheok, the 18th generation descendant of Chan Yan Si, then moved to Chan Chu Aun, Amoy, where his lineage passed through five generations before the birth of Chian Eng Kong.

Chian Eng Kong was the 4th son of Chan Cheong Kong. About 650 years ago, during the late Yuan Dynasty, he moved to San Peng Ang in Tong Aun County and married Saw See Cheng, who later gave birth to a son named Buan Seng. The family then moved to Teh Toon (later Sin Kang). There Chian Eng Kong inherited numerous assets from a Khoo family. Subsequent generations accepted him as the progenitor of the Khoo clan of Sin Kang Village, Hai Teng County.

The second generation Khoo Buan Seng had two sons, namely Tua Huat (Guan Heng Kong) and Cheng Huat (Guan Teong Kong). From the third generation on, the family expanded and became a big clan. For the past 650 years, the descendants of the Sin Kang Khoo Clan spread all over China as well as Taiwan, The Philippines, Indonesia, Myanmar, Thailand, Malaysia, Singapore and some European and American countries.

Originally the Chinese character of Khoo had simpler strokes. During the Qing Dynasty, the emperor ordered those having the surname of Khoo (丘 Qiu) to add the radical to become 邱 as a mark of respect for the sage Confucius whose personal name was 丘. 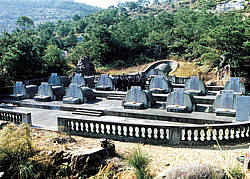 The graveyard of the ancestors of the Sin Kang Khoo Clan was relocated at Nei Shan, Shi Jing in 1992. The tombstones are placed in genealogical order 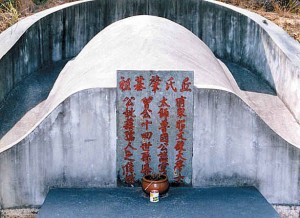 The tomb of Progenitor Chian Eng Kong – (CLICK TO ENLARGE)