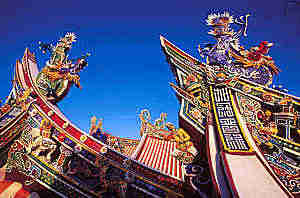 The rich, multi-layered scenes on the roof and the swallow-tailed ridge of Leong San Tong. Note that underneath the ridge stands a turbaned watchman waving his hand and looking at something

Leong San Tong has the most spectacular ridge decorations among the Southern Fujian architectural heritage established in the late Qing Dynasty. The elaborate jian nian decorations cover a great part of the roof. The three-meter pai tou on the rooftop above the main hall is the most distinctive ridge structure ever found. It is a representation of the unique status and influence of Leong San Tong Khoo Kongsi in the past.

Besides the massive cut-and-paste and the stucco decorations, the ceramic figurines and the Jiao Zhi pottery are also found in Leong San Tong. This is one of the few places where one can find all the four types of ridge decorations on one roof.

A stucco sculpture is usually moulded in the shape of plants, animals or figures and then finished in colour. If the size is huge, an internal iron framework will be necessary.

The Jiao Zhi pottery is pottery that is glazed and burnt in a low-temperature klin. Its colour is distinctive but not striking.

A ceramic figurine is glazed and burnt in a high-temperature klin.

The “Li Shi” made of stucco is supporting the pai tou 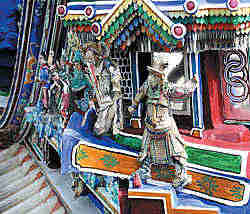 The Jiao Zhi pottery which is unique in this region 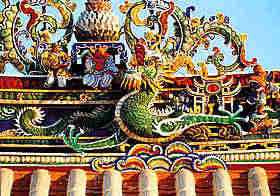 The red blazing pearl glass globe is supported by a stucco work of plant motifs, under which is an ornament featuring the story of “a carp jumping through the dragon gate and becoming a dragon” 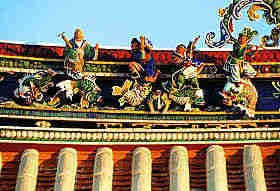 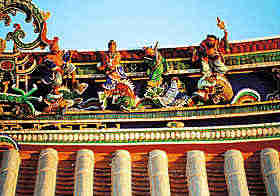 These four types of ornaments are found at the main ridge, the slanting ridge, the pai tou (barge-board) and the gable chine.

The jian nian work on the main ridge of the central hall features “two dragons playing with the pearl,” while the ones at the ridge endings feature the rarely seen “dragon fish swallowing the ridge.” The two dragons, which are strong and lively, are frolicking with the blazing pearl with their heads turned backwards. They have two colours, green in front and blue at the rear; but the unusual colouring does not prevent them from becoming jian nian masterpieces.

The red blazing pearl glass globe, which is located in the middle of the main ridge, is supported by a stucco work of plant motifs, under which is an ornament featuring the story of “a carp jumping through the dragon gate and becoming a dragon.” On both sides are the eight immortals with vivid expressions as well as gestures riding on carps or dragon fish.

The ornament in the middle of the ridge of the Prayer Pavilion features Jiang Zi Ya riding on a strange animal. This ornament acts as a talisman against evil. A curling dragon is found under Jiang Zi Ya. 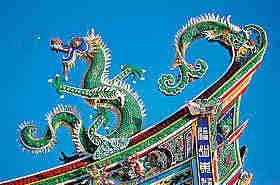 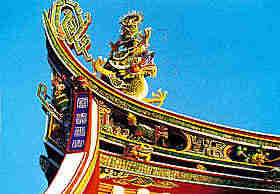 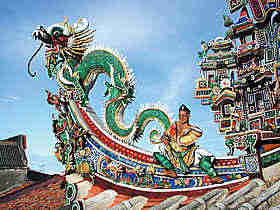 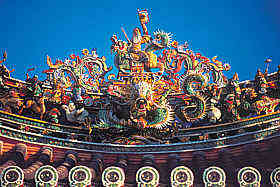 The ornament in the middle of the main ridge of the Prayer Pavilion features Jiang Zi Ya riding on a strange animal called si bu xiang, under which is a coiling dragon 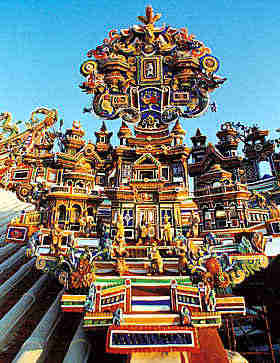 The huge, colourful jian nian pai tou on the top of the roof above the main hall is a symbol of the extraordinary status of Leong San Tong Khoo Kongsi 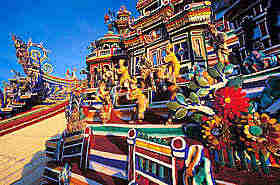 Leaning from the main ridge are other descending ridges with curl endings. The basket-like barge-boards known as the pai tou are found on these descending ridges. There are elaborate jian nian work which are decorated with plant and pavilion motifs. They are also known as the ting jing (the pavilion scene). They are packed with vividly cut and pasted stage scenes and ceramic figurines of various gestures.

The pai tou of Leong San Tong are grand and spectacular. Under the sun, the pieces of mirror and colourful porcelain shards shine dazzlingly. What is more, the ceramic figurines in the pavilion scene have exquisite gestures and facial expressions and they look like they are in a real stage performance.

As the roof of the Prayer Pavilion is smaller than that of the main hall, the four pai tou on it are also smaller. There is a couple of strong guys made of stucco showing that they are supporting the pai tou on the central roof.

Under the swallow tails (the ridge endings) of the main hall as well as the Prayer Pavilion, there are sculptures featuring the story of “Liu Hai frolicking with a toad.” which symbolises the portrayal of wealth. Both ends of the main ridge feature two interesting local figures. One of them is a Chinese with a broad-rimmed soft-felt hat; the other is a turbaned watchman waving his hand and looking at something.

The triangular roof gables on both sides of the Prayer Pavilion are also ornamented with colourful legendary and historical figures. The roof gable on the right has a few decorations of Jiao Zhi pottery which are rarely seen in Malaysia.

The pai tou of the pavilion scenes on the Prayer Pavilion 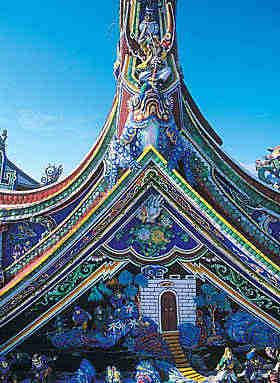 The pediment and the swallow-tailed ridge of the Prayer Pavilion. At the top of the pediment is found an interesting sculpture depicting the story of “Liu Hai frolicking with a toad”, while inside the pediment are found figurines in a stage performance

The Gable Wall and the Decoration at the Basement

The frieze at the basement of the main hall features a strip decoration which consists of stuccoed and ceramic works depicting legendary stories. Images of local towkays are also represented.