The Stone Carving and Structure of Leong San Tong 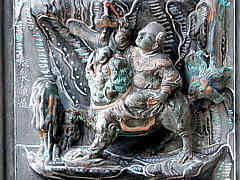 The name of one of the masonries, Zhang Quan Shun, is carved on the stonework

Due to the clansmen’s generous contribution, a large number of superior quality stone materials have been used for the construction of Leong San Tong. Green, white and pinkish stones are used for the walls from the Prayer Pavilion to the verandah. The walls as well as the stone columns are all delicately carved and even painted.

The stone materials were imported from Amoy, Fujian Province. There were three major contractors. Their names can still be recognised from the ink signatures on the walls.

The stone structure of Leong San Tong can be divided into two categories. The first category includes those used for the groundwork or the rim protection, such as the floor slabs, the rim stones, the wall bases, the corner stones, the staircases and the wall skirtings. They are without elaborate decorations. The second category includes those of structural and decorative functions. They are the columns, the column bases, the wall panels, the door-frames, the lintels, the mullions. the stone lions and the stone drums.

In what follows, the stone materials in Leong San Tong and their features will be described and explained.

In the courtyard there is a pair of huge and powerful green stone lions. With the male sitting on the left and the female on the right, they guard the courtyard as well as the clanhouse. In-between them stands a green stone incense burner with the inscription of the “Cheng Soon Keong.” 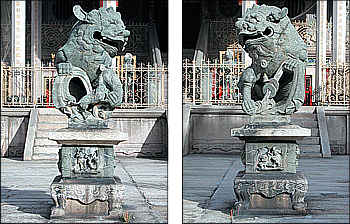 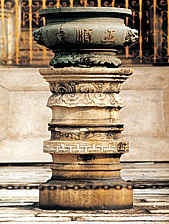 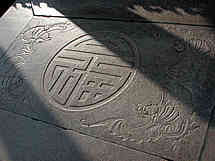 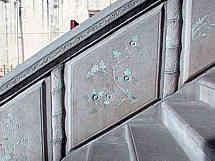 The stone panels of the grand staircase is delicately carved

In front of the Prayer Pavilion, the “Stone of the Royal Way” which is usually found in the palace protrudes right from the middle of the elevated terrace. A bass-relief of four bats and a Chinese character fu (福) in round shape appears on its surface, symbolising the arrival of five different types of good fortune (wu fu lin men).

Six octagonal stone columns support the roof truss of the Prayer Pavilion. At the entrance, a pair of uniformed and armed turbaned watchmen with vivid facial expressions bring out a strong and interesting cultural contrast.

Connecting the Prayer Pavilion to the main hall is a grand staircase whose balustrades on both sides have bass-relief of plant motifs. At both ends of the handrails, there is a pair of figurines. Resting at the lower ends are two stone monks, one laughing and the other crying-hinting at the interplay of joy and sorrow of human existence. At the upper end of the right handrail stands a stone child who holds a palm-leaf fan and a coin symbolising wealth (zhao cai), while opposite it stands another stone child with a golden ingot symbolising the coming of good fortune (jin bao). Together, this pair represents the aspiration for wealth and prosperity (zhao cai jin bao)

The stone child symbolizes the coming of good fortune (Jin Bao). Together, this pair of stone carvings represents the aspirations for wealth and prosperity (zhao cai jin bao)

The stone child symbolizes the beckoning of wealth (zhao cai) 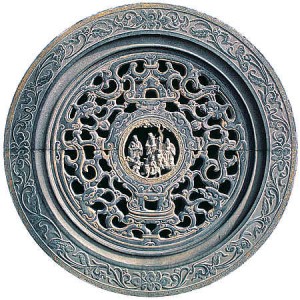 Two big round stone windows on the wall of the basement. The centre of the one on the left features the motif of longevity and prosperity – (CLICK TO ENLARGE) 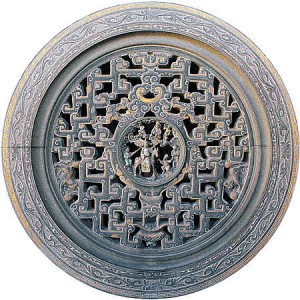 At both sides of the grand staircase, i.e. the walls of the basement of the main hall, there are two big round, well ventilated windows. The centre of the round window on the left features the motifs symbolizing prosperity and longevity, while the one on the right depicts the stories of reward for filial piety.

The most exquisite stone carvings of Leong San Tong are found at the verandah of the upper floor of the main hall. The four octagonal columns in front are very attractive. Each of them is made of a single piece of green stone, on which is carved a powerful dragon coiling downwards while looking upwards to the sky. There are also secondary motifs of immortals and other auspicious animals. 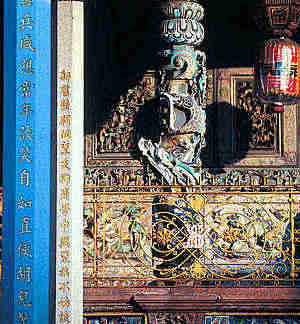 The swirling dragon on the monolithic stone column is a masterpiece of sculptural work. The column also features other sculptural motifs, including figures, flowers, birds and marine life. 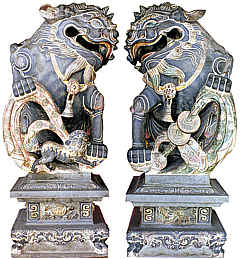 A pair of green stone lions at the entrance of the Cheng Soon Keong, with the male sitting on the right playing with two coins while the female of the left playing with her cub (looking outward from the central hall)

There is a pair of green stone carvings at the bottom of both door-posts of the three halls on the upper floor of Leong San Tong. The stone carvings in the central hall are stone lions while the two side halls have stone drums. They are joined to the shafts of the door-posts and help to hold the door in. In appearance, they also serve as a directional guide, leading the visitors into the halls. The stone lions in front of the Cheng Soon Keong accentuate its status as the central hall. The gate-keeping lions also represent the respectful reception of its honourable guests. On the other hand, the stone drums in front of the side halls have a helix decoration on the flanks, figures and auspicious patterns at the bases. 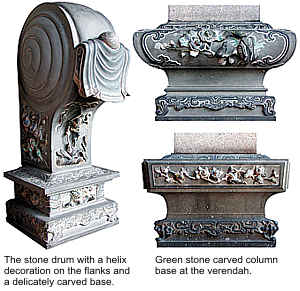 The whole surface of the front walls of the main hall, from the top to the bottom, is formed by a hundred spectacular panels of stone carvings. According to their heights, these wall panels can be divided into five categories, namely the top panels, the body panels, the waist panels, the skirting panels and the foot panels.

The body panels are the essential parts of the stone relief on the walls. Of these panels, the ventilated window panels are the most excellent. The windows are in three shapes; round, octagonal, and square. In accordance with the hierarchical order of the Southern Fujian architecture, the round window panels are found at both sides of the main entrance to the central hall, followed by the octagonal and the square window panels towards both ends of the front walls.

The octagonal window with bamboo balustrades. The hollowness of bamboo symbolizes the virtue of humanity
(CLICK TO ENLARGE)

The rectangular window features “Kung Ming defeating Jiang Wei,” an episode in “Romance of The Three Kingdoms”
(CLICK TO ENLARGE)

Praying For. – A general and a child hold a flag (qi) and a ball (qiu) respectively. This pictorial presentation is a pun on the phrase praying for (qi qiu) 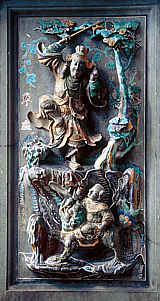 Auspices and blessings. – The figures hold a halberd (ji) and a chime (qing) respectively. This pictorial presentation syombolizes auspicies (ji) and blessings (qing)

The carvings on the walls are rich and significant. By means of metaphors or other figures of speech, these carvings convey directly or indirectly various messages. Some of them portray the arrival of good fortunes and the avoidance of bad luck. These include “eastern dragon, western tiger” (dong long xi hu). “praying for auspices and blessings” (qi qiu ji qing). “wealth and safety” (fu gui ping an), “sun, moon and kylin” (ri yue qi lin), “three goats for auspicious beginning” (san yang kai tai), “joy flies onto the eyebrow” (xi shang mei shao), etc. Most of them feature the motifs of flowers, birds, animals and human figurines.

Safety – The vase (ping) represents safety (ping an), while the peony stands for wealth. Together they represent wealth and safety (fu gui ping an)

The relief sculpture with three goats is a pictorial representation of the auspicious expression “san yang kai tai”, literally meaning three goats for auspicious beginning, which is commonly used at the beginning of the year 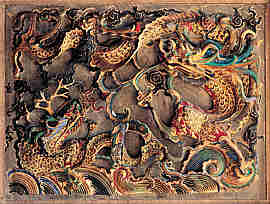 Eastern dragon. On the left, the engraving features two dragons in the cloud and sea 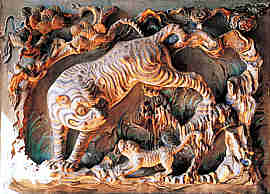 Western tiger. On the right, the exquisite folklyric engraving features two tigers, one big and one small, roaming in the woods

Some other carvings depict educational themes commonly found in the Chinese mythology, historical anecdotes of folklores. These include stories from Romance of the Three Kingdoms, The Legend of the White Snake, and “The Picture of the Four Affections.” The thematic messages of these depictions are the traditional values of loyalty, filial piety. faith and righteousness.

Among them, the most famous ones are the four panels at the front wall of the Cheng Soon Keong that depict the twenty-four stories of filial piety. Each panel has six stories, and some of the stories reappear in the murals inside the halls. The recurrence of these stories is to remind the Khoo clan of the importance of filial piety, for it is the continuous practice of filial piety that the clan culture can continue for generations.