The Murals and Coloured Drawings in Leong San Tong 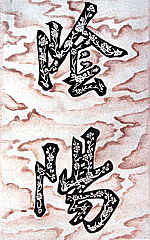 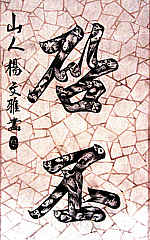 The coloured drawings in Leong San Tong are peerless in Malaysia in terms of quantity, quality and size. The large murals can be found in the Cheng Soon Keong, the rear corridor and the front porch of the basement.

The Murals in the Cheng Soon Keong

There are four murals in the Cheng Soon Keong. Two of them are the “Watching the Bridegroom at Tai Fo Temple of the Wu State” and the “Birthday Celebration of Guo Zi Yi.” The most fascinating ones, however, are the “36 Celestial Guardians” that almost totally cover both panels of the wall. These 36 celestial guardians, 18 on each side of the wall, are commonly found in the Southern Fujian temples. Leading them is the “message carrier” who rides on a horse.

The celestial guardiansof both sexes and in mandarin or military attire. They ride on different animals such as the dragon, the lion and other rare creatures, and each of them is armed with a unique weapon. They are rich, interesting pictorial representations of folklores and art

The “36 Celestial Guardians” are very huge representations but the artist’s work is exemplary. At the bottom of the wall, on the left is the signature of the painter Yeoh Boon Ngah the Hermit. Apparently, Yeoh Boon Ngah was a renowned painter and a man of letters at that time. He knew poetry, painting and calligraphy. He also understands the social status of Khoo Kongsi and the minds of its leaders. His specialties had won him the appointment for the paintings of the “36 Celestial Guardians” in the Cheng Soon Keong and the “Hundred Sons and Thousand Grandsons,” the “Nine Old Men,” the “Three Visits to the Cottage” and the “Heaven-touching Filial Piety” at the rear corridor. 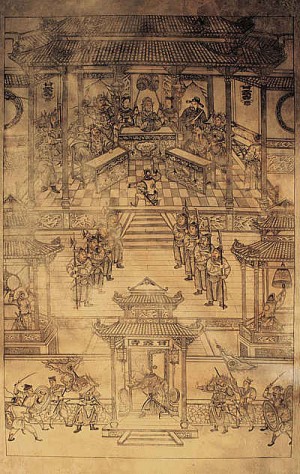 The story depicts the Queen Mother of Sim Quan, the King of Wu, who originally intended to trap Liu Bei, but on seeing his extraordinary appearance at Gan Lu Temple, finally decided to marry him to her daughter – (CLICK TO ENLARGE) 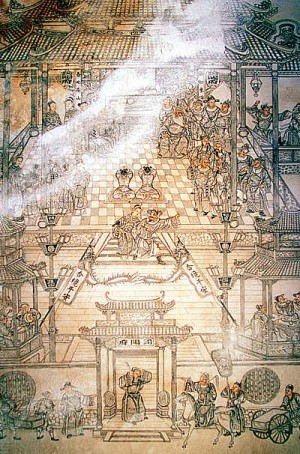 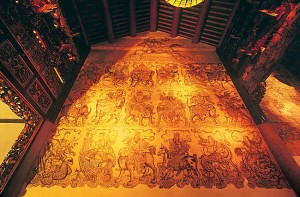 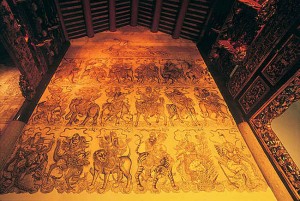 The rear corridor is much less resplendent than the main hall. The sober wall has large murals of the late Qing Dynasty, which are rare in this region

The Murals at the Rear Corridor

There are seven murals at the rear corridor, three of them large and four of them small. They have survived the test of time for almost a century, since the completion of Leong San Tong. Their perfect condition makes them some of the most important heritage paintings of this country. 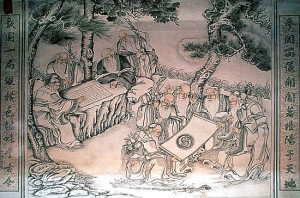 The magnificent picture of the “Nine Old Men” – (CLICK TO ENLARGE) 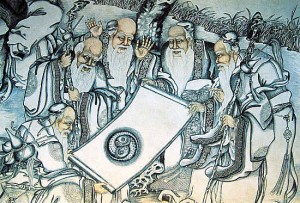 Detail of the Nine Old Men. The Twin Fish Chart, which represents yin and yang in Chinese philosophy, implies the flux of the world – (CLICK TO ENLARGE)

The story originated in the Tang Dynasty. During the summer of the fifth year of the reign of the Emperor Wu Zong, the famous poet Bai Ju Yi and eight other old men gathered in Luo Yang. They wrote and recited poems and had the event recorded in a painting called the “Nine Old Men”. The painting advocated optimism as a means for good health and longevity.

The couplets that go with the painting read : “to observe the two spheres regulating yin and yang between Heaven and Earth: to play a game of chess reflecting the strategies of the past and the present.”

The nine old men in the painting looked calm and relaxed. They are either observing the “Twin Fish Chart” or playing a game of chess. This implies that they have mastered the vicissitude around them with a kind of easiness, for the twin fish chart in Chinese geomancy is a symbol of the flux of the world.

This painting seems to pay tribute to the leadership of Leong San Tong Khoo Kongsi whose insight into the ways of changes in a highly competitive society has steered Khoo Kongsi to the top.

The Hundred Sons and Thousand Grandsons 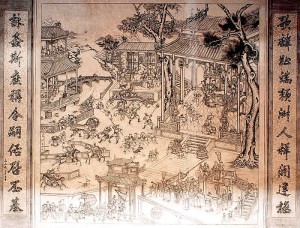 The Hundred Sons and Thousand Grandsons. The vivid and lively picture has a dense composition – (CLICK TO ENLARGE)

This painting epitomises the common wish of Chinese society for a big family with plenty of offspring. For a house filled with offspring is considered a blessing. It is also the wish of the Khoo clan to procreate and flourish on this land, as the number of offspring illustrates the power of the clan.

This painting has a rich and dense composition. The family members filled up the big house and in its spacious courtyard are burning firecrackers, lion or dragon-dancing, riding and shooting on horses. These scenes create an ardent and joyful atmosphere. On the bridge in the courtyard there is a person waiting to receive a decree from the Emperor, while outside the gate there is a procession bearing the plaques of learning achievement with the accompaniment of gongs and drums, indicating that someone in the family has passed an imperial examination.

The Fisherman, Woodsman, Farmer and Scholar

The two paintings flanking the “Hundred Sons and Thousand Grandsons” are thematically a pair. The one on the right features a fisherman and a woodsman, while the one on the left features a farmer and a child reading and riding on the back of an ox, hence the title the “Fisherman. Woodsman. Farmer and Scholar” (Yu Qiao Geng Du).

The representation reflects the values revered in a traditional agricultural society, in which people are encouraged to work hard to be self-sufficient on the one hand, and to cultivate good morality and try for an official career through studying on the other.

The well-known Eight Immortals are considered auspicious. The mural of these Immortals in Leong San Tong depicts the eight in a leisurely mood. It was painted by an artist surnamed Tan from Tong Aun in 1905. This work shows a different style from that of Yeoh Boon Ngah.

The couplets flanking the painting read: “loyal officials and dutiful sons are first-class human beings; farming and studying are two things that matter most.”

The former accentuates the significance of loyalty and filial piety as advocated in Confucianism, while the latter reiterates the meaning as represented in the “Fisherman. Woodsman. Farmer and Scholar.” 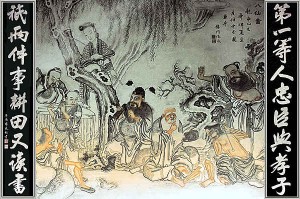 The mural of the Eight Immortals by an artist surnamed Tan from Tong Aun. These immortals, whose images are copeid from a picture book published by Jie Zi Garden, depicts the eight sitting, standing or leaning at a leisurely mood. The former : “Loyal officials and dutiful sons are first-class human beings”; and the latter : “Farming and studying are the two things that matter most” (CLICK TO ENLARGE) 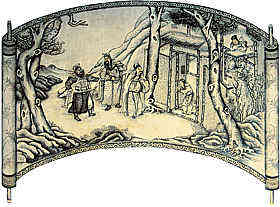 The story of the “Three Visits to the Cottage”, which tells of Liu Bei, Guan Gong and Zhang Fei’s three visits to the cottage of Zhu Ge Kong Ming to invite him to be their military adviser to the Kingdom of Shu. Moved by their sincerity, Kong Ming in the end accepted their invitation 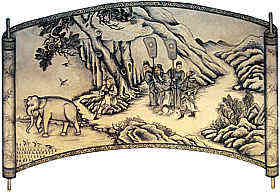 The Door Gods at the Verandah

The Door Gods or Men Shen painted on the door act as a talisman guarding against evil spirits and welcoming good fortunes. 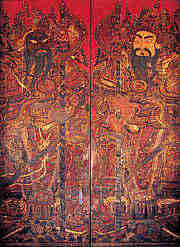 The mighty and dignified Door Gods, Shen Tu and Yu Lei, at the Cheng Soon Keong 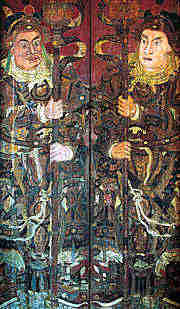 The martial Door Gods at the Hock Teik Soo 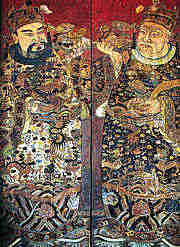 The Door Gods painted on the door of the Ee Kok Tong. The hat and the deer represents the acquisition of official ranks