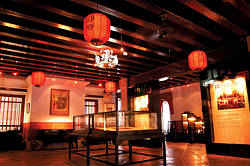 For the past 200 years, from the emigration from Sin Kang Village in China to the formation of Khoo Kongsi in Penang, the Khoo clan has gone through some phases of social changes.

From the late 18th century to 1850, the Khoos migrated from Sin Kang Village in China to Penang and involved themselves in trades and other careers. They formed a closely-knit community, took care of each other and gathered on the 5th day of the 5th Moon every year to celebrate the birthday of Tua Sai Yah. In 1835, they founded the Ee Kok Tong as an early form of clan association.

The period between 1850 and the early 20th century saw the strongest kinship in the Khoo clan which comprised of the Sinkeh (new immigrants) and the local-born 2nd and 3rd generation clansmen. The vast and stable population of the Khoos settled down in the Weld Quay area and around Tua Cheng Hang (Cannon Street) where they bought a plot of land on which the clanhouse, Leong San Tong, was built. The ancestral and deity worship, the compilation of The Genealogy of the Sin Kang Khoo and Chan Clans as well as the founding of the Sin Kang clan school showed their firm commitment to replicate a clan community in the British colony of Penang.

In the late 19th century, Leong San Tong Khoo Kongsi established connections with the other kongsi in Penang, and the clansmen also participated actively in the local organisations and religious activities. They became an important social influence in the local community. During the 1880s, the Khoos had also extended their economic and political influences beyond Penang to Sumatra, Southern Thailand and other areas in the vicinity of Penang.

From the early 20th century to the end of World War II, like any other kongsi in the early years of the 20th century, Leong San Tong Khoo Kongsi established good relationship with the British colonial government and some of the clansmen sent their children to English schools. As a result of this, a new group of English-educated or “Baba” leaders established themselves in Khoo Kongsi. These leaders observed an eclecticism of the Western and traditional Chinese clan aspirations. The clanhouse, Leong San Tong, was a good reflection of this eclecticism.

In the 1920s, Leong San Tong Khoo Kongsi’s purchase of Thean Teik Estate was the largest property investment in Penang. Leong San Tong Khoo Kongsi encouraged non-clansmen to cultivate the land, and some of the clansmen had also moved in from the Kongsi’s enclave in George Town. During the Japanese occupation, many clansmen moved away from the kongsi enclave to hideouts in the suburbs. After the war, many Kongsi’s houses that were left behind by the clansmen were rented to non-Khoo tenants.

In 1955, Leong San Tong Khoo Kongsi became a registered organisation. In 1976, it was registered as Trustees of Leong San Tong Khoo Kongsi (Penang) Registered and had its investments managed by a board of trustees formed by representatives of the See Tua Kak, making it identical to a modern family corporation. In order to enjoy the benefits which Khoo Kongsi offered, each of the clansmen had to register with the kongsi, although no membership fee was required. Today, however, the authority of the “patriarch” (Keh Teoh) or the traditional rules of the clan are no longer feasible among the clansmen.

At the same time of inheriting the traditional clan system, Khoo Kongsi is adjusting itself to modern society.