Home   /   The Tour   /   The Architectural Development of Leong San Tong

Leong San Tong sits in the middle of the courtyard and faces west-northwest. This position is the same as that of the progenitor Khoo Chian Eng’s tomb in Sin Kang.

Leong San Tong has a width of seven bays with a protruding facade. It consists of three parts : a prayer pavilion which is almost half a storey above the ground level, a double-storey main building, and a single-storey kitchen on the side wing to the left.

The architecture is that of a colonial hybrid. It reflects the style of temples in Southern Fujian with a prayer pavilion and that of an early local bungalow with a front porch.

Architecturally, the original bungalow in which Leong San Tong was first established is an Anglo-Malay bungalow. The construction was based on the Malay stilt houses during the colonial era. It has a symmetrical structure with a protruding posted front porch, under which is a semi-open staircase that leads to the verandah.

Khoo Kongsi purchased this premise in 1850 and converted it to a clanhouse in 1851. The structure of the Indo-Malay bungalow was represented in the 1891 ~ 1893 survey plan of George Town. The bungalow remained for 43 years, after which the clanhouse was rebuilt based mainly on the Southern Fujian architecture in 1894.

However, this unique structure is not the only one in Penang. The clanhouse of Boon San Tong Khoo Kongsi already established in 1878 at Victoria Street is also of a similar structure. Apparently, the architecture of Leong San Tong is based on Boon San Tong but with greater magnificence. This is the kind of blended-Chinese-culture clanhouse that cannot be found in China.

On the other hand, the Ee Kok Tong in the home village of Sin Kang, like any other typical Southern Fujian clanhouse, is a single-storey courtyard house with two sections, two side corridors and a central airwell. It has a width of three bays and a front verandah with a recess doorway, and the ancestral altar is located at the rear section. The Cheng Soon Keong and the Hock Leng Keong in the village are also of the single-storey, double-section set-up.

Integration of architecture in Leong San Tong – CLICK TO ENLARGE

Integration of architecture in Leong San Tong – (CLICK TO ENLARGE)

Integration of architecture in Leong San Tong
(CLICK TO ENLARGE) 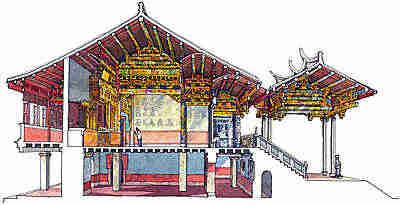 The cross sectional perspective view of Leong San Tong : The floor levels are gradually elevated to the back according to feng shui principles 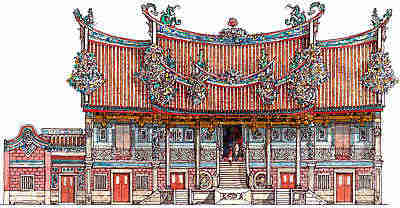 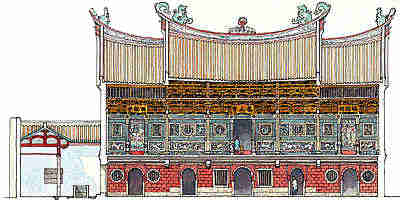 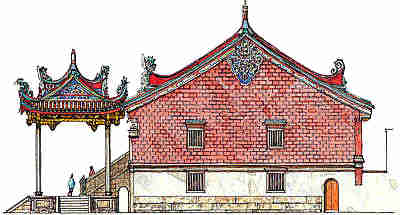 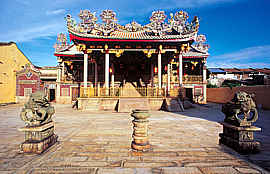 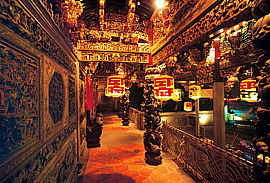 Night scene of the verandah