The Origin of Cannon Street 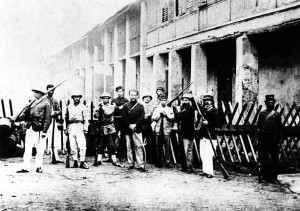 During the Penang Riots in 1867, only a limited armed force and police could the colonial government mobilize to keep the peace of the island. (Courtesy of the Penang State Museum) – (CLICK TO ENLARGE)

Secret society wars known as the Penang Riots occured in 1867 when the alliance of Tua Pek Kong Hoey (Kean Teik Tong) and the Red Flag Gang fought against the alliance of the Ghee Hin Kongsi and the White Flag Gang for ten days in George Town. The Tua Pek Kong Hoey, led by Khoo Thean Teik consisted mainly of the Hokkien; the Ghee Hin Kongsi was Cantonese-based; while the Red Flag and the White Flag Gangs comprised of the Malays and the Indians.

The name of Cannon Street (Tua Cheng Hang) originated from this event with two versions of the story. One report said that in order to suppress the riots, the colonial government fired cannons at the territory of the Tua Pek Kong Hoey and created a big hole on the street; so people called the street Big Cannon Hole (Tua Cheng Khang). Later, as the hole was levelled up, it was renamed Cannon Street (Tua Cheng Hang).
Another story said that the Tua Pek Kong Hoey placed cannons on the street to resist the enemy and thus it was called Cannon Street.

According to a contemporary survey, the Tua Pek Kong Hoey actually possessed firearms and artillery during the riots, and the original Cannon Street was a much narrower defensive alley. In fact the name of Cannon Square had already appeared in 1867, indicating that Cannon Street could have been named after it.