The Timberwork of Leong San Tong 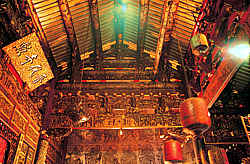 The most important architectural expression of Leong San Tong lies in the timberwork on the roof truss. The truss structure of the Cheng Soon Keong and the Prayer Pavilion are of the Ting Tang Zao” style, a kind of roof truss which is uplifted by four principal columns.

There is a total of twenty-one purlins from the front to the rear verandah of the main hall, thirteen of which are in the Cheng Soon Keong central hall. Above the front verandah and the altar are curved ceilings constructed in ascending order towards the centre.

Under the “three cross-beams and five queen-posts” are placed additional rectangular supporting truss beams, to which five-arc-bracers, bases and brackets are attached. In this way, the roof truss becomes structurally stronger and gains greater aesthetic value.

The three-bay, eight-pillar Prayer Pavilion has seven purlins. The two side-bays have boat-mat-styled ceilings. The central bay has a “three cross-beams, five queen-posts” truss roof like that of the central hall; only that the cross-beams are rectangular. Its bases are not melon-shaped; they are of animal motifs. The truss roof as a whole, like that of the central hall, is typical of the Zhangzhou (Chiang Chew) architecture. 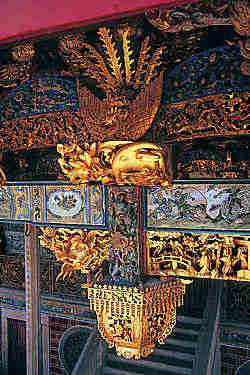 Woodcarving under the eave of the Prayer Pavilion; from bottom to top are tne hanging basket, the short column, the standing timberwork. the animal base, and a carving depicting an immortal riding on a phoenix. On both sides of the short column are dragon fish-shaped joint brackets and sui respectively

Refined woodcarvings almost entirely fill up the timberwork of Leong San Tong, especially of the roof truss of the Prayer Pavilion, the front verandah and the central hall. Some of these woodcarvings are painted, some are gilded, and thus look more majestic and dazzling. 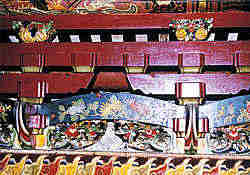 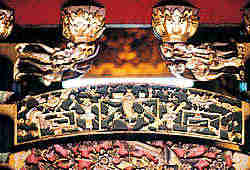 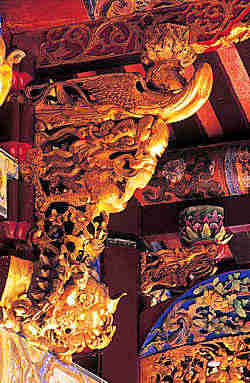 The dou gong in Leong San Tong are magnificent demonstration of dynamics and aesthetics. From bottom to top are dou gong with the motifs of flowers and birds, dragons and flying goddesses respectively

The Dou Gong (The Cantilevered Base and Bracket)

The Dou gong is a kind of corbel unit which is unique in Chinese architecture. Dou or base is a square wooden block with grooves on the surface, while gong is an arched bracket protruding from a post or a base and is attached to another base.

Leong San Tong has a complicated roof truss held together by various dou gong. These bases and brackets are named differently according to the places they appear. In Leong San Tong, you have the eave dou gong, the wall frieze dou gong and the main truss dou gong.

There is a great variety of motifs used in the dou gong in Leong San Tong. The dragonhead gong are found in the Prayer Pavilion, the verandah and the central hall. The roof trusses of the central hall and the verandah have elaborate gong in the motifs of flowers and birds, dragons and flying goddesses (fei tian). In other places of lesser importance such as the side of the altar and the rear corridor, the knife gong and the gourd gong can be found.

As for the dou, there are two types, namely the Tau Wan (peach-shaped) dou and the octagonal lotus dou. Usually, the latter goes together with the dragonhead or the flying goddess gong.

The Gua Tong (The Melon Dou Base)

The gua tong or the melon dou base is a type of corbel unit. This melon-shaped dou base holds on to the cross-beam like the paw of an animal. A number of gong and dou are placed on it so as to distribute the weight of the roof truss to the cross-beams.

The melon dou bases are found only on the truss of the central hall. They are round and are carved with lion faces from whose mouths protrude their paws. They gripped tightly at the adjoining cross-beams. 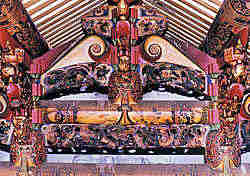 Bracket base in the shape of a lion, which represents patronage, is auspicious and a protection from evil

Bracket base in the shape of a toad. The three-legged toad absorbs the energy of nature and breathes out the air of auspices

Bracket base in the shape of an elephant, symbolizes auspices and blessings

Bracket base in the shape of a kylin, which is an auspicious animal

Bracket base in the shape of an eagle and a bear, represent “The meeting of Heroes”

The Shou Zuo (The Animal Dou Base)

Another type of corbel unit is the shou zuo or the animal dou base. It is usually of the motifs of auspicious animals, especially lions.

One of the most outstanding features of the timberwork of Leong San Tong is its variety of the animal dou bases of the Southern Fujian architecture, which includes the dou bases of lions, elephants, kylins, deer and toads.

These auspicious animals hold plants in their mouths, play with their cubs, or carry deities on their backs. Each of them is unique and is a splendid demonstration of artistry, creativity and originality.

Apart from the melon and the animal dou bases, there is also a semi-circular dou base in the shape of a bowl. The refined ornamentation on it displays motifs of plants and human figures. 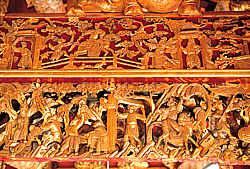 The Sui, which is a structural reinforcement under a beam, is a major timberwork found in Leong San Tong. As it is wide but not the primary load-bearing structure, it is carved out and ventilated. The motifs include auspicious plants, birds and animals as well as legends and historical episodes.

Among these woodcarvings, the most attractive one is called the yuan guang, which is found at the verandah. It is not only carved out and ventilated, but is also double-sided. This double-sided carving is very difficult to produce, for it requires the craftsman to depict different motifs and stories on both sides. 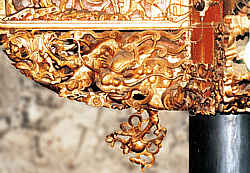 The Tuo Mu (The Joint Bracket)

The Tuo mu or the joint bracket is a stabilising triangular structure between the beam and the column.

The Tuo mu. which has the shape of a phoenix or a dragon fish holding some plants in its mouth, are seen under the beams of the Prayer Pavilion as well as in the central hall. In other places, most of the delicately carved tuo mu display the motifs of human figures or plants. 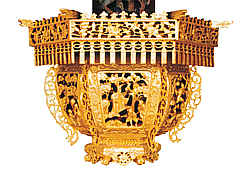 The Diao Tong is a short column hanging on the beam under the eave. It has the function of load-bearing for the eave. When it takes the shape of a lotus or flower basket, it is also called the chui hua (hanging flower) or the diao lan (hanging basket).

A diao tong in the shape of lotus. It is also called cui hua, meaning hanging flowers

The Shu Cai (The Standing Timberwork)

The Shu cai is a timberwork standing upright in front of the diao long to cover the tenon of the timberwork at the back.

Most of the shu cai in Leong San Tong are in the form of wooden boards, on which sit three-dimensional carvings depicting an immortal riding on a phoenix. The motifs of this immortal also appear on the wall frieze to add grandeur to it.

There is an interesting shu cai under the eave between the verandah and the Prayer Pavilion. On the left, it depicts a Westerner with a walrus moustache and a wide-rimmed soft-felt hat on his head riding on a lion, while behind him stands a little Chinese woman who seems wanting to look at the binoculars in his hand. On the right, also riding on a lion, is the Patron of Scholarship (kui xing), who is in charge of the fortune of scholars.

The design of the lion-riding Westerner placed in a position equivalent but opposite to the Patron of Scholarship is worth giving a second thought. What does it mean? Was the sculptor implying that in the colonial era, a technology savvy Westerner was more powerful than a scholar? 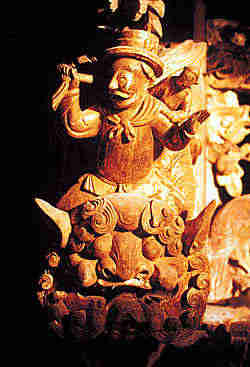 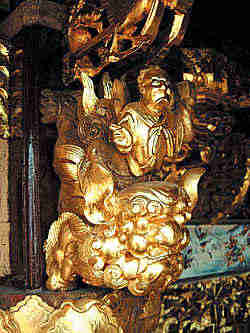