The plaque of the Administrative Building 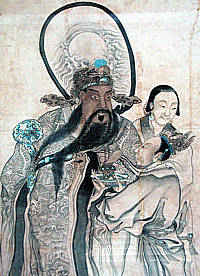 Portrait of Lu Xing, the Deity of Rank and Affluence

The administrative building is the place where clansmen hold meetings and settle clan affairs. It was built a few years after the establishment of Leong San Tong.

In view of its architecture, this building which is a separate entirety from the clanhouse, bears evidence of the influence of British colonial architecture.

Looking at the facade, the administrative building consists of two double-storey bungalows joined together. The one on the left is higher and has a parapet on the rooftop, while the one on the right has a tiled roof. The pediment in the middle has the decorations of the “Tai Chi Nine Stars” for driving away evil spirits and the “Double Bats” for welcoming good fortunes. Below, but on top of the window, is the stuccoed sculpture featuring “a lion biting a sword” which is symbolic for keeping away evil spirits. The building is in fact an amalgamation of Eastern and Western architecture.

The wing on the right has a recess porch with delicate engravings on the door, windows and the wall panels. Originally, the hall enshrined a portrait of Lu Xing, the Deity of Rank and Affluence. Since the altar for the enshrinement of the ancestral tablets at the Ee Kok Tong in Leong San Tong was over-crowded, an extension of the Ee Kok Tong was set up in this hall in 1978 and the deity of the God of Wealth was moved to the adjoining wing. Today, the annual enshrinement of the new ancestral tablets is conducted in this hall. 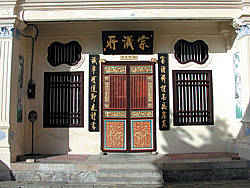 The recess porch at the right wing of the Administrative Building 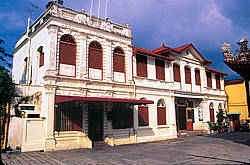 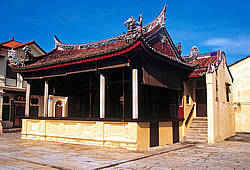 The Opera Stage, which directly faces Leong San Tong, is majestic as well as elegant 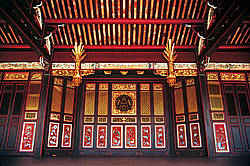 The screen wall of the opera stage has nine panels. The centre of the panels in the middle has round openings with square frames which are decorated with delicate carving of the dragon and incense burner motif

The opera stage, which directly faces Leong San Tong, was once an area used for stage performance and other entertainments. It is now available for use by charitable organisations and other institutions for festivities.

This opera stage is not the original stage. The original one was simpler and had one bay only. It is inferred that the original stage was demolished together with the five other terrace houses behind it between 1894 and 1906 when Leong San Tong was rebuilt. Then it was replaced by the present one. In the rebuilding, a passageway was laid out on both sides of the stage, making the whole courtyard look more orderly.

The opera stage of Leong San Tong is unique when compared amongst the other Chinese temples and clanhouses in Malaysia. It is majestic as well as elegant. It is divided into the front and the rear portions. The front stage has three bays and they are open. The facade is clearly divided into three sections: the base, the pillars, and the roof. The roof of the front stage is of the xie shan (half-pitched, half-gable) form. Its main ridge has a beautiful and gentle curve, similar to that of Leong San Tong. It is mainly decorated with the jian nian porcelain shardwork and the pai tou of intricate ceramic figurines. The roof truss is of the “three cross-beams, five queen-posts” wooden structure. The cross-beams and queen-posts are made of simple and unadorned square logs.

The screen wall of the front stage, which serves as the backdrop, has very rich wooden carvings. Of the nine screen panels, the five in the middle stand in a line parallel to the facade, while the other four panels stand two by two at certain angle on each side of the wall.

The screen panel is long. It has a solid skirting which is decorated with bass-reliefs of plants, birds and animals. The upper part of it is ornamented and has a ventilated, gilded relief. In the middle of the central screen panels, there are round openings with square frames. At the comers of each square frame, there are four bat carvings. The frame of this unique opening is painted black with a golden rim and has decorations of the dragon motif.

Under the beam of the screen wall, there are two shu cai (standing timberwork) depicting an immortal riding on a phoenix. 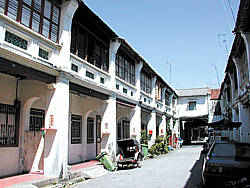 The Sixteen Houses in two rows facing each other. Each row has 8 units

Leong San Tong Khoo Kongsi is actually a complex with more than 60 terrace houses and shophouses owned by the kongsi. Surrounding Leong San Tong are the opera stage and the administrative buildings. Before World War II, this complex was actually a “clan village” occupied by the Khoo families.

These houses were built in the late 19th century and had existed before the rebuilding of Leong San Tong. The row of terrace houses with the front yard at the northern side of Cannon Street was reconstructed in the thirties of the 20th century. This is to provide for a broader street. 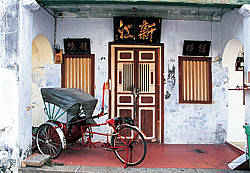 One of the Eight Houses

All these houses are long and have two sections and are two-storeyed. At the street level is the five-foot way. There is an airwell in the mid-section of the house.

Facades of these terrace houses have pillars that stand up from the five-foot way to the simple ornamented gable eave of the upper floor. This is typical of an early Chinese shophouse. The louvered windows on the upper floor occupy the whole upper facade without separations in between. Below the windows are green glazed openings for ventilation.