The Clan Structure of Khoo Kongsi

The See Tua Kak or the Four Sectional Groups were formed by descendants of the Khoos from the fourth to the eighth generations. Each group is made up of different branches (pang), and there are altogether 13 branches.

Boon San Tong Khoo Kongsi formed itself as Hai Kee Kak, the largest of the See Tua Kak. It consists of five branches, namely Hai Teoh, Hai Jee, Hai Sar, Hai See and Hai Goh. It took shape not later than the formation of the Ee Kok Tong in Penang. The clansmen of Boon San Tong Khoo Kongsi built a double-storey ancestral hall at Victoria Street in 1878. Its completion was earlier than Leong San Tong.

Toon Boon Tong Khoo Kongsi was set up in 1884 to manage funeral arrangements and other affairs as well as to foster the solidarity of the clan. When a member of Toon Boon Tong Khoo Kongsi dies, all members will attend and assist in the funeral rites. It also plays the role of a peacemaker when there are disputes among the clansmen, and helps carry out the affairs of the clan. It was previously housed in the hall to the left of the basement of Leong San Tong. 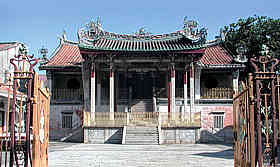 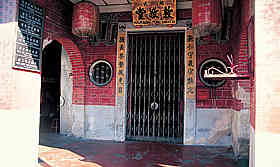 The Genealogy of the Khoo Clan 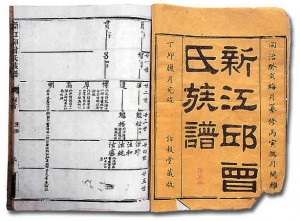 The genealogical recording is part of the clan system. Firstly, it aims at keeping track of the clan’s development as a mark of respect to the ancestors. Secondly, it demonstrates the achievements of the clan. Finally, it serves as a record for the educational purpose of the descendants, so that they will know their origin and continue to practise what their ancestors did.

The genealogical poem or chart, which was passed down serves as a naming guide to the clansmen. It consists of characters representing the middle name of each generation, from which the generation hierarchy can be identified. The genealogical chart that Khoo Kongsi adopts, which begins with KAY of the 8th generation, is inherited from the Chan family. It has 40 characters in the form of a poem with 5 characters to each line. A clansman with his middle name following this chart can easily locate his generation hierarchy. For example, Khoo Kay Poh with the middle name Kay belongs to the 21st generation. Today, the Khoo offspring have reached the 27th generation.