The Khoo Kongsi complex consists of the clanhouse Leong San Tong, an administrative building with a meeting hall and offices, an opera stage, and 62 units of terrace houses and shophouses. There are three entrances to the complex: the main entrance is at Cannon Street: the rear entrance, with a decorative archway, faces Beach Street; and the side entrance leads to Armenian Street. The closely-knit building complex is a reflection of the strong centripetalism and solidarity of the Khoos in the past. It also reflects the defensive instinct of the local Hokkien community to safeguard against the inadequate public security during the British rule in the 19th century.

The defensive formation of Khoo Kongsi resembles the Hakka’s wei (literally meaning enclosure), bao (literally meaning fort) or tu lou (literally meaning earthen building). The difference is that, like the complexes of the other four big clans, it came into being in the diversity of a migrant society with a colonial, urban and commercial context. Surrounding the ancestral hall and clan dwellings are shophouses. It is both a close as well as an open complex, for it is open to the public during daytime and can be closed down for internal security when necessary.

Referring to a map before the 20th century, it is obvious that during the time when gang war was prevalent, Khoo Kongsi was well protected amidst the clusters of shophouses. Its entrances could barely be noticed. Cannon Street at that time was even narrower than the alley between the Sixteen Houses and the present main entrance, and between the courtyard and the Eight Houses was a wall with a small gateway. The labyrinthine configuration of these alleys and shophouses made the Khoo Kongsi complex look like a village. 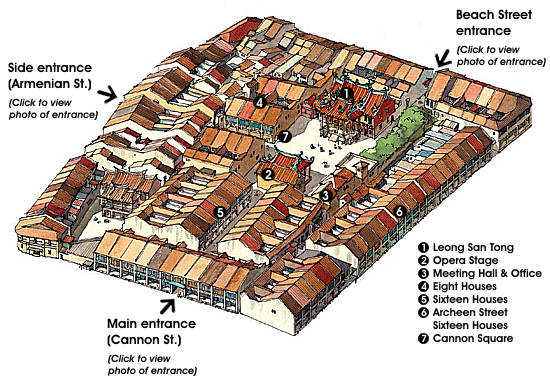 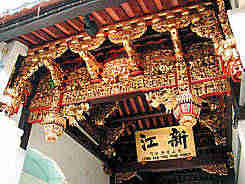 The arch at Beach Street are delicately carved and gilded 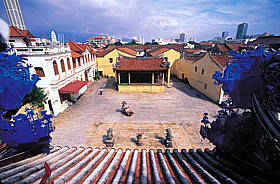 Cannon Square is surrounded by shophouses and terrace houses