The most important practices in a clan society are ancestral and deity worship. The Chinese believe that when a person dies, he lives on in the form of a spirit or ghost and continues to have influence on his offspring. Therefore, the dead must be worshipped as if he is still alive. Ancestral worship is thus not only an act of commemoration of the ancestors, but also a practice of filial piety. The Ee Kok Tong in the right wing of Leong San Tong is the ancestral hall of the Khoos. In it, ancestral tablets (sin choo pai) are placed according to the ancestors’ positions in the clan hierarchy. On the 1st day of the llth Moon of the Chinese Lunar Calendar, the celebration of the Ancestors’ Remembrance Day is conducted. This is also the day on which the new ancestral tablets can be enshrined at the altar in the Ee Kok Tong.

Besides that day, ancestral worship is also conducted on the day of the Spring Worship (Cheng Beng), the Dragon Boat Festival (Tuan Ngoh) and the Founders’ Anniversary Worshipping.

The plaque of Ee Kok Tong 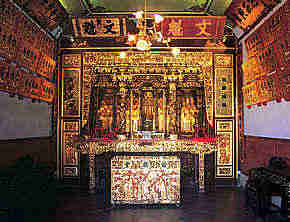 The Ee Kok Tong, the ancestral hall located in the annexe to the right of the central hall. The ancestral hall of the 1st to the 20th generation of the Sin Kang Khoo Clan are enshrined at the altar 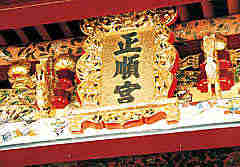 The plaque of the Cheng Soon Keong

Cheng Soon Keong, the central hall of Leong San Tong, enshrines Ong Soon Yah (the Great Duke) and Tua Sai Yah (the Noble) who are the patron saints of the Khoos.

Cheah Aun (Ong Soon Yah) and his nephew Cheah Hean (Tua Sai Yah) were famous generals of the Jin Dynasty in the 4th century. In the historical battle of the River Fei. General Cheah Hean with a small army of eighty thousand confronted the enemy troops of one million commanded by General Fu Jian of the Former Qin Dynasty, while Premier Cheah Aun employed psychological warfare tactics to trap the enemies among the grasses and trees.

In this way. General Cheah Aun successfully saved the Jin Dynasty from its downfall. It is from this battle that came the famous Chinese proverb, “both the grasses and trees look like soldiers,” which illustrates how a state of extreme nervousness and fear was brought about.

Because of their bravery and wit in protecting the people and the territory. General Cheah Aun and Cheah Hean were deified in later year. 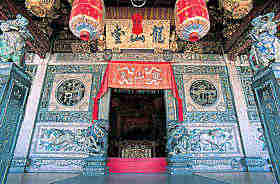 The front entrance of the Cheng Soon Keong 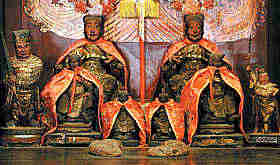 Patron Saint Tua Sai Yah, the famous General Cheah Hean of the Jin Dynasty, is enshrined in the main hall

The Cheng Soon Keong temple in Sin Kang has enshrined Ong Soon Yah and Tua Sai Yah since the late Ming Dynasty. The Khoos who remained in the village as well as those who went overseas were always blessed and protected by these two patron saints. Therefore, the Cheng Soon Keong was set up by Leong San Tong Khoo Kongsi to worship Ong Soon Yah and Tua Sai Yah as practised in China including other deities such as Kuan Im (Goddess of Mercy), Poh Seh Tai Tay (God of Medicine) and Mah Chor Poh (Goddess of the Sea).

In the annexe to the left of the central hall is the Hock Teik Soo, which enshrines Tua Pek Kong (the God of Prosperity) who protects local households worship amongst the Chinese. 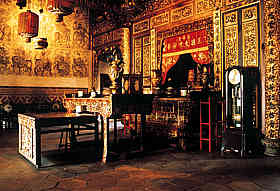 The interior of the Cheng Soon Keong. On both sides of the wall are murals depicting the 36 Celestial Guardians 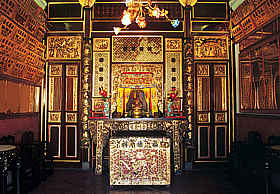 The interior of the Hock Teik Soo

The plaque of the Hock Teik Soo 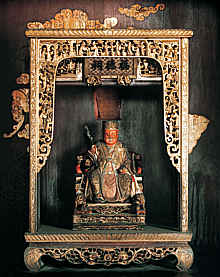