Home   /   History   /   The Origin and Establishment
View this page in Chinese

The Origin and Establishment

The Origin of Leong San Tong

On the 5th day of the 5th Moon in the 2nd year of Dao Guang’s reign (1835), when the Khoos gathered to celebrate the birthday of the Patron Saint Tua Sai Yah, they realised the need to establish a clanhouse to unite and look after the welfare of the clansmen as well as to worship their ancestors. Therefore, on the 8th day of the same month, 102 clansmen congregated and decided to set up the Ee Kok Tong. A sum of 528 Dollars was collected during the meeting and it was put into investments for more than ten years. In 1850, on the 5th day of the 7th Moon, the Khoos bought the present site of Leong San Tong in the name of Tua Sai Yah. It measured 97,035 sq. ft. on which stood a British owned local bungalow.

The following year, the local bungalow was converted into a clanhouse, in which was enshrined the deity of Tua Sai Yah. The tablets of the ancestors of the first to the fifth generations and Tua Sai Yah’s deity were brought all the way from Sin Kang. In the courtyard, trees were planted to provide shade.

The newly converted clanhouse was named Leong San Tong, and was used for gathering, ancestral worship and weddings. On the Double Fifth Festival (the 5th day of the 5th Moon) every year, the Khoo clansmen would come to worship Tua Sai Yah and a procession would be held to mark the event.

A few years later, the Board of Trustees built a block of office building on the vacant lot of the courtyard, housing the conference and administration hall.

The Establishment of Leong San Tong

The 1851 bamboo couplets in the Cheng Soon Keong, which survived the fire of 1901, are now hanging in the Hock Teik Soo

Almost half a century later, when Khoo Kongsi had grown in terms of population and wealth, the clanhouse was beginning to show signs of deterioration. In 1894, the Board of Trustees decided to demolish the old clanhouse and rebuild the new one using master craftsmen from Southern Fujian. It took eight years to complete this new clanhouse. Unfortunately, the magnificent building was almost completely razed by fire on Chinese New Year’s Eve in 1901.

The loss of the grand clanhouse which had been built with great effort and money was painful, but the Khoos were not deterred. In 1902, they reconstructed the clanhouse from scratch. This time it took four years to complete. The two constructions spanned thirteen years and cost more than one hundred thousand dollars each. The Leong San Tong we see standing today is the one completed in 1906. It was partially damaged in World War II when the Japanese bombed George Town. Repair works were done to fully reinstate the clanhouse to its former glory in 1958.

When the Khoos established Leong San Tong Khoo Kongsi in Penang, they had brought along with them the social structure and culture of South-eastern China to this British colony.

In a clan community, ancestral worship is essential. Clansmen of a common blood tie live together and stay bonded by a clan system which has been observed for generations. They always have a clanhouse for ancestral worship.

The Khoos who had migrated to Penang were from different branches of the clan. When they set up their clanhouse, they adopted the name of the ancestral hall of Sin Kang division, which was the Ee Kok Tong. However, the clanhouse in Penang was named Leong San Tong (literally “Dragon Mountain Hall”) in honour of the Chan lineage in Leong San, Chuan Chew Prefecture, from which the Sin Kang Khoo Clan originated.

The plaque of Leong San Tong 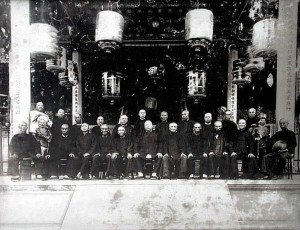