Home   /   The Tour   /   The Architectural Structure of Leong San Tong

Despite its Indo-Malay bungalow influence in the floor plan, 90 percent of the structure and decoration of Leong San Tong is typical of the Southern Fujian style. Among other things, this Southern Fujian architecture features on the rooftops of the main hall and the Prayer Pavilion using curved surfaces and wing-shaped ridges with cut-and-paste decoration and stucco sculpture. The roof truss is of the “three cross-beams, five queen-posts” wooden structure, while the side wing and gable wall, which serve as the load-bearing wall, are made of bricks and stones. The bricks and roof tiles used for the gable walls and rooftops are mainly red in colour, while the walls at the verandah are green and white stone with decorations. 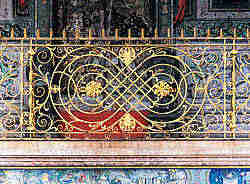 There are some evidence of Western influences in the architecture of Leong San Tong. The most obvious one is the wrought iron fencing of flora motif at the upper-floor verandah of the main hall which is custom-made in England. On the fence, there is an embossment of KKS, an abbreviation of Khoo Kongsi. 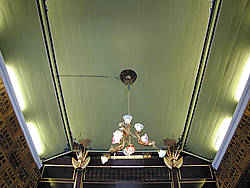 The second Western influence is the trapezium ceiling in the Hock Teik Soo and the Ee Kong Tong halls. A typical Southern Fujian building does not have a ceiling here.

The Western influence can also be recognised in the louvered windows and balusters at the rear verandah. They all have Western decorations. 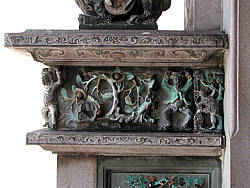 One of the “Sinolised” stone carvings at the front verandah, which features foreigners lifting their hands to support a roof eave

Apart from that, the capital of pilaster on the ground floor of the main hall, the moulding and the grand staircase leading to the main hall show Western influences too, but with a certain extent of “Sinolisation.” The two statues of the turbaned watchmen at the Prayer Pavilion, the occidental figurines on the roof truss and the stucco figurines of the Sikhs on the rooftop are all a demonstration of the eclecticism of the society and an epoch in which Leong San Tong Khoo Kongsi was established.