The Spatial Order and Roof Patterns of the Leong San Tong 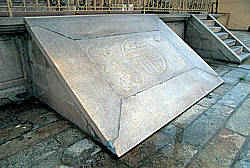 Stone of the Royal Way

Leong San Tong is not only outstanding in its structure, but is also mature and elegantly proportionate in terms of form. It depicts excellent craftsmanship in woodcarving, stone carving, coloured drawing, stucco sculpture, cut-and-paste decoration and tiled roof work of master craftsmen from Southern Fujian at the end of the Qing Dynasty. It is indeed the grandest masterpiece of its type in South East Asia. 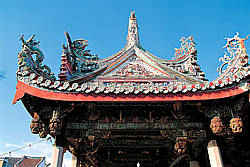 The wing-shaped ridges of the Prayer Pavilion 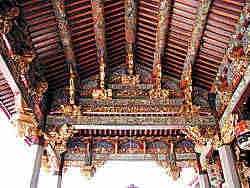 The main truss of the Prayer Pavilion

Occupying the front part of Leong San Tong, the lofty and elegant Prayer Pavilion stands on an elevated, spacious terrace 1.2 meters above the ground. The four staircases leading to it and the “Stone of the Royal Way” protruding right from the middle of the terrace accentuate a sense of grandeur at the entrance of the clanhouse.

On the terrace, stand six octagonal granite pillars that support the beam and the roof. The roof is of the type called xie shan (half-pitched, half-gable roof). Its main ridge is divided into three sections and the tips of each section are adorned with turn-up swallow-tailed decorations.

The Prayer Pavilion and the main hall are connected with a grand staircase which apparently is adapted from the semi-open stairway of a local stilt bungalow. 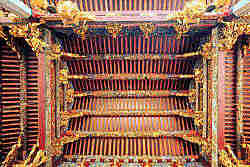 The main truss of the Prayer Pavilion is in the form of “three cross-beams, five queen-posts.” Its bracket bases are not melon-shaped; they are of animal motifs. The wood carvings are gilded and painted for a respledent and magnificent effect 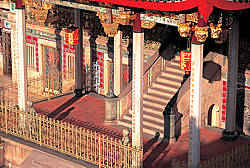 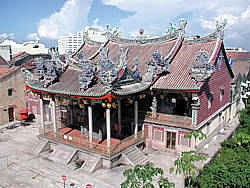 On the upper floor of the central hall is the Cheng Soon Keong. To its left is the Hock Teik Soo, and to its right the Ee Kok Tong. The central hall at the lower floor (basement) was used for wedding tea receptions in the early days. To its right is a corridor leading to the kitchen. Now, it is a museum.

Plaque of the Xiu Xun Suo, or the Kitchen 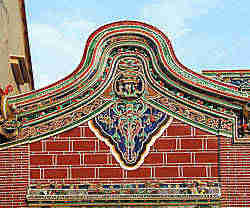 The main truss of the Prayer Pavilion

The kitchen is typical of the Southern Fujian styled side wing. It has an airwell, and its gable has a round end. A corridor connects it with the main hall.

The Prayer Pavilion, the main hall and the rear verandah are laid out at different levels to give the building a terraced perspective. This is a reflection of the Chinese saying bu bu gao sheng (step-by-step one prospers) as well as the Feng Shui principles.

On the other hand, the differences in the heights and designs of the Prayer Pavilion, the main hall and the kitchen also mark the hierarchy of these spaces.