By ROYCE TAN (The Star) 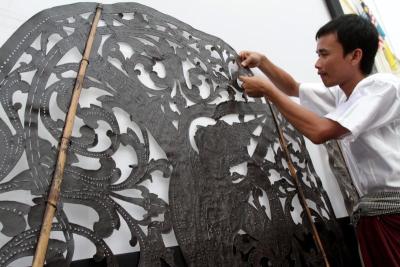 Final touches: A Wat Bo troupe member making final adjustments to a shwdow puppet before the show at the Khoo Kongsi.
Photos by CHAN BOON KAI and ROYCE TAN (THE STAR)

PERFORMING for the first time in Penang, the Wat Bo Large Shadow Puppet troupe left the audience enthralled with their Sbaek Thom, an art form unique to Cambodia.

Sbaek Thom, which literally means ‘large leather’, is a type of puppet dance-drama similar to the wayang kulit of Malaysia.

All Sbaek Thom stories are episodes from the epic tale of Reamker based on the Ramayana.

The puppets are generally larger than those used in wayang kulit and are made of cow leather which has been carefully cut into shapes to show characters in the drama.

Troupe leader Vann Sopheavouth said that to make the hermit character, the leather used must be from a cow that has died naturally, and the craftsman must be of pure heart and dressed fully in white when producing it.

The 50-minute show held at the Khoo Kongsi in Cannon Square was based on the third episode of the Reamker, called the ‘Sau Neakabas’.

As there are no official scripts for the story, the performance was conducted from memory.

Minutes before the show started, troupe members meditated while Sopheavouth sprinkled holy water on them and on the puppets.

The show which was conducted in the Khmer language was translated into English.

The troupe comprising 16 performers aged between 18 and 40, was started by monks at the Saytwo Refugee Camp in 1993.

The monks continued to practise the art form when they moved to Siam Reap and established themselves at the Wat Rajabo Pagoda (Wat Bo).

The troupe was brought in by AirAsia as part of its Asean-level corporate responsibility sponsorship with the support of the CLA, a group dedicated to reviving endangered Cambodian art forms,

Also held at the Khoo Kongsi was a Hokkien opera performance by the Jade Opera Troupe and Arts and Acts from Singapore.

The show called ‘The Painted Skin —A Ghost Story’ was written by the troupe’s artistic director Dr Chua Soo Pong.

The tale was about a scholar who was seduced by a demon.

Both performances were held in conjunction with the George Town Festival.