BY SYLVIA LOOI (The Star)

PENANG: Patience and perseverance is what conservationist Tan Yeow Wooi had to produce a book on the history and architecture of the century-old Leong San Tong Khoo Kongsi building.

After two years of meticulously going through volumes of the Khoo Kongsi clan’s genealogy (25 volumes of 150 pages each), Tan’s labour bore fruit when his 136-page book finally saw print.

Tan, 44, said he was commissioned by Khoo Kongsi in 2001 to write the book Leong San Tong Khoo Kongsi, The History And Architecture.

“The book is an enlarged edition of Discovery, which was printed in conjunction with the restoration of the Leong San Tong Khoo Kongsi clan houses in 2001,” he told newsmen yesterday. 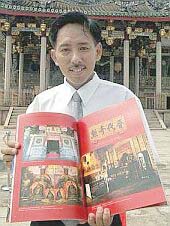 Tan showing the book published after two years of research.

He said the coffee table format book had more illustrations and photographs besides providing an in-depth account of the migration of the descendants of Khoo Chian Eng, the progenitor of the Khoos from their ancestral village of Sin Kang to the island.

Tan said that some of the information contained in the genealogy was not complete and he had to depend on oral history.

“I even made a trip to the Sin Aun Village in China’s Xing Lin District to study the clan’s history,” he said, adding that he stayed in the village for two weeks.

Recalling the hardship he faced while writing the book, Tan said that some of the terms could not be translated into English.

“I put it in quotes or han yu pin yin,” he said, adding that some of the pictures in the book were also taken by him.

Earlier in his speech, Teng congratulated Khoo Kongsi for taking the initiative and investing in publishing the book.

“I hope the Khoo Kongsi’s Board of Trustees will distribute the book to countries such as Singapore, Hong Kong and Taiwan where history buffs and those in the architectural and heritage restoration field will find it interesting,” he said.

In his speech, Leong San Tong Khoo Kongsi president Datuk Khoo Keat Siew said the book was the first of its kind produced by a Chinese clan house in the state.