Rich history of a clan

By IAN MCINTYRE (The Star)

PENANG has a total of 11 museums now with the recent reopening of the Khoo Kongsi Museum at the imposing Leong San Tong Khoo Kongsi Temple at Lebuh Cannon in George Town.

Chief Minister Lim Guan Eng who opened the refurbished museum said he was glad that museums were becoming an added attraction in the state, especially among tourists.

He said among the museums in Penang were the Penang Museum, Toy Museum, War Museum, Islamic Museum, the P. Ramlee Museum, the Sun Yat-Sen Museum and the University Sains Malaysia Museum 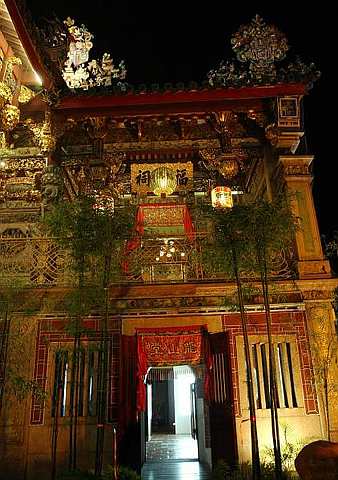 The entrance to Khoo Kongsi Museum.

“The Khoo Kongsi Museum has the potential to become a popular attraction as it is part of efforts to preserve and market the state’s biggest treasure, which is the heritage trail,” he said.

He said the Khoo Kongsi building under the imposing Leong San Tong Khoo Kongsi Temple attracted some 350,000 visitors after its restoration in 2002.

He expects more visitors to the building with the reopening of the museum. 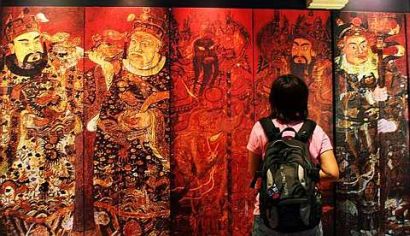 A visitor taking a close look at paintings of Chinese gods.

He said the museum stands as a fitting tribute to the tenacity and toil of the early Chinese settlers in Penang who journeyed from China to seek a better life.

The Khoo clansmen were among the earliest arrivals and their legacy is now permanently recorded in the museum.

The premises used to be a venue for the clan’s wedding receptions until the 1960s when it was converted into a museum. 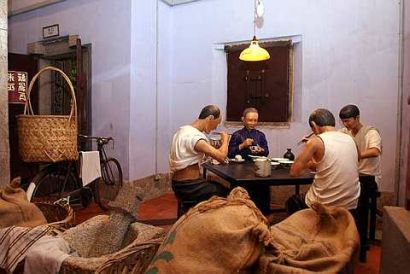 A mannequin display of early Chinese settlers having a simple meal in humble surroundings.

However, it was left neglected for the most part as a greater emphasis was placed on restoring and beautifying the main structure which is the Khoo Kongsi Temple.

Boo Chia said he used the RM380,000 allocation to refurbish the museum.

Under the tagline ‘Inspired by the past, built for the future’, he has come up with an interesting account of the past and present of the Khoo clan.

He said the museum was designed to blend the old and the new and there were various displays of the early life of the clansmen and their genealogy linked to today’s generation.

There are also mannequin displays showcasing the austere life of the early settlers upon arriving in Penang plus computerised designs on the Khoo clan and their life today.

Keat Siew hopes the museum can become a unique selling point on the heritage trail.

He said the Khoo Kongsi trustees’ board planned to furthur develop the temple and the museum into an intergrated Khoo clansmen cultural centre.

Keat Siew said the centre could act as a catalyst to attact people back to the inner city heritage enclave in the evenings besides acting as a new platform for more tourism activities after dusk.