Story and photos by JEREMY TAN (The Star)

THE niceties of Chinese folk culture were unravelled in a kaleidoscopic melange of colours, rhythms and graceful dance moves in the illuminative showcase — An Evening of Lights at Khoo Kongsi.

The historic clan house, specially lit up for the occasion, provided a majestic backdrop for the bedazzling repertoire of Chinese cultural numbers, expertly performed by guest dancers from the 5678 Dance Studio.

As gentle Oriental chords resonated across the vast courtyard, the vibrantly-clad fleet-footed performers twirled and swirled around with much gaiety, flailing chiffon ribbons and waving fans.

And with a few contemporary routines and singing performances sandwiched in between, the crowd of several hundred, mostly foreign tourists, had much exoticness to savour throughout the night.

One of them, Dutchman Theo ven Iperen, 47, who came with his wife and two ballet-inclined daughters, said even though they were quite familiar with the world of dancing, what they saw here was totally new.

“We had no inkling about this kind of traditional Chinese dances.

“They were very colourful and gave us a good insight into a whole new culture,” he said.

“My daughters loved them and even tried to dance along at some point,” said ven Iperen, who saw the event poster at his nearby hotel and decided to check it out.

Briton Mark Yaxley, who was visiting the country for the first time with his girlfriend, felt the showcase was among the highlights of their trip so far.

Having visited Kuala Lumpur before stopping over in Penang, he liked the contrasting settings.

“Over here, things are more laid-back and you really get a feel of its rich history and heritage. We walked along the Street of Harmony and found it amazing that you have different religious houses all next to each other.

“With cultural shows like this, everything comes to life,” he opined, also expressing his hope that such events can be held more often.

The night’s programme started off with a multi-cultural dance number that paid tribute to the nation’s ethnic diversity and it was followed by an array of traditional numbers, each representing the different ethnic minorities in China. 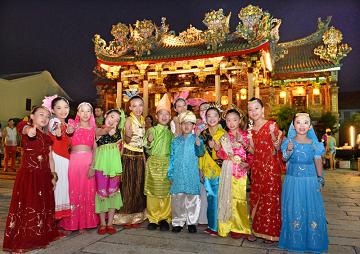 They included the auspicious ‘Good Luck’ dance, infused with streaks of red and yellow.

Its upbeat rhythms then gave way to soothing melodies in ‘Blooming Jasmine’ and ‘Moonlight on the Lake’.

While the former had dancers twirling around in gentle shades of pink and white, the latter saw them prancing flamboyantly in cyan and lavender.

A hint of alluring playfulness could be found in ‘Kiss Me Once’ while ‘Childhood Memories’ brimmed with youthful exuberance as dancers recalled their childhood days of frolicking.

These were contrasted by more modern numbers, such as the Hawaiian-inspired ‘Banana Boat’ dance and an adorable cover of Wonder Girls’ hit, ‘Nobody’.

The recent event, organised by Penang Global Tourism, also featured a mini-bazaar with traders selling various handicraft and novelty items, as well as a selection of hawker fare.