“THANK you for letting us visit this beautiful, historic place. Best wishes!”

These were the words of actress Jodie Foster, penned in the Khoo Kongsi visitor’s book, during the filming of Anna and the King at the Khoo Kongsi in George Town in 1999.

The remarks also did not escape the watchful eyes of film location expert Goh Mai Loon, who included them in a souvenir album entitled Anna and the King in Penang: Malaysia an ideal film location site. This album was used as a means to promote Penang to filmmakers.

The album featured the various places used in the filming of the movie, which lasted 12 days, such as the Swettenham Pier, Armenian Street, the Town Hall building, Khoo Kongsi and the Syed Al-Attas Mansion on Armenian Street.

According to Goh, who was on the editorial committee to produce the 32-page full-colour bilingual album, the album promoted heritage preservation and conservation.

“Anna and the King put Penang on the world map. It showed Penang people how we could benefit from a movie filmed in Penang,” she said, adding that the editorial team spent three months working on the album.

The proceeds from the album went towards funding conservation and heritage education-related programmes, facilitated by the Penang Heritage Trust.

Apart from Anna and the King, other movies which have been filmed in Penang include Indochine and Paradise Road. Not to be forgotten is the movie initiated by Goh — Road To Dawn — which depicts an obscure episode in Sun Yat Sen’s revolutionary life, when he sought refuge in the state from July to December 1910.

The movie, unlike Anna and the King, was filmed entirely in Penang. Goh made sure of that. Filming took 38 days from Aug 3 to Sept 10, 2006.

“Initially, Derek Chiu (the director) was not sure what he could film in Penang. But after seeing the sites, he was convinced and quite firm on filming all in Penang.”

Goh, who coordinated the cooperation between China and Malaysia for the movie, noted that the beauty of Road To Dawn was that real locations were used, without any touch-up.

“This amazed the production team. The people and music were authentic.

“The thing about filmmakers is they love to film on actual sites. ”

The movie featured natural scenery, historic buildings and streetscapes still found in Penang which are reminiscent of the 1910 era, such as Armenian Street, Tok Aka Lane, the Pinang Peranakan Mansion, the Cheong Fatt Tze Mansion, the Sri Maha Mariamman Hindu Temple, the Kapitan Keling mosque and a Christian cemetery.

Goh said she had had several encounters with tourists who came here after watching Road To Dawn, citing an instance in 2007 when a Chinese couple cancelled their trip to Bali to come here instead.

“Another example was a Taiwanese family coming here to visit after watching the movie.”

Since Road To Dawn, Goh said, Penang had become a centre for filming. 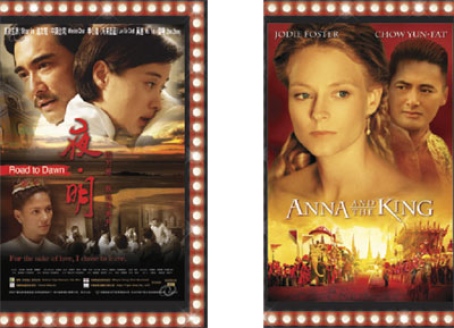