Visitors treated to cultural extravaganza at celebrations in heritage enclave 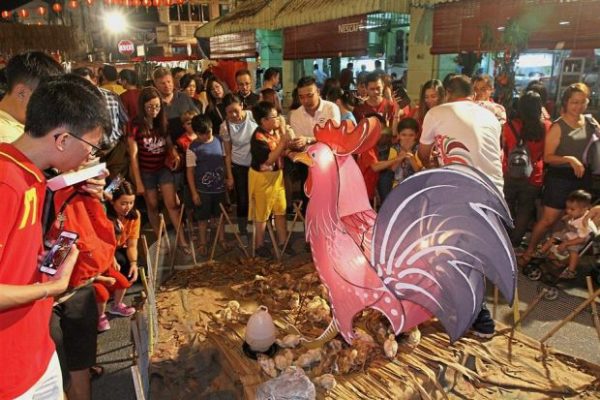 Visitors looking at the chicks in conjunction with the Year of the Rooster at the Penang Chinese New Year Celebration at King Street, Penang. Starpic by LIM BENG TATT / The Star / 04 Feb 2017.

PURE white liquefied glutinous rice flour for making nian gau or Chinese New Year cakes dripped from the edge of an old granite mill, much to the delight of children learning how to use such a mill for the first time in the Khoo Kongsi courtyard.

At the Penang Teochew Association in Chulia Street, women had the chance to have their faces painted like Chinese opera performers to see what they looked like.

Visitors also had instant joss paper folding lessons at Yap Temple in Armenian Street and watched up close how goldsmiths created works of art by hand with the precious metal at Ng Clan Temple in King Street.

The heritage hub supplied a profusion of centuries-old traditions, arts and craft for thousands of people on Saturday night as part of the Chinese New Year celebrations, thanks to the Penang Chinese Clan Council.

Visitors feasted their eyes and taste buds on various cultural shows and delicacies in 10 heritage streets in old George Town.

Spectacular sights of glowing cherry blossom trees, a golden prosperity rooster sculpture and an iridescent dragon complemented the festivity to celebrate the Year of the Rooster with pomp and grandeur.

British couple Alec Hutchings, 24, and Phoebe Hewitt, 22, were intrigued by the insights into cultural arts through the host of activities.

“Chinese New Year is lively here. I love the fun atmosphere and I even bought a rooster plushy souvenir.

“There are many things we have not seen before. Even trying to fold the paper origami chickens was a new experience,” said Hewitt.

“This is my home away from home. I stayed here for six years in the past and I made it a point to return this year because I know this is the place where I can capture the CNY atmosphere.

“The CNY celebration in Penang is often concentrated at one place,” he said.

In his speech, Chief Minister Lim Guan Eng lauded the event for allowing centuries-old traditions and cultures to be enjoyed by locals and tourists.

Shutterbugs clicked away at King Street where vintage cars were displayed.

Children immersed themselves in traditional games such as snakes and ladders and Chinese chess.

The celebrations drew to an end with a display of fireworks.